Are you transferring your money internationally and suspect you might be paying too much in fees?

Hate to say to say it, you are right.

Terrible exchange rates, getting charged onerous fees at both ends and slow transfers are a common complaint.

These days however it is far cheaper and quicker to transfer your money with an international money transfer company.

As you can see the total costs can be significantly more if you use a bank. In this example I would have lost over $200 extra on $5000 by using my bank.

So why do people use a bank?

Usually, trust and put simply they have not heard about Transumo yet. Lucky you. We understand the trust thing, so let us clear a few things up.

Many people use banks because they feel they can trust a bank to securely deliver their money to a bank account overseas – this is true, although an international money transfer company is likely even more secure because there are subjected to the same banking regulations as a bank, except they have to do it for each country in which they operated in addition to anti-money laundering laws.

Many of these companies are also large publicly listed companies. Although that in itself is not necessarily a good reason to trust them, but it does make us feel more secure knowing that their entire business is built around securely and efficiently moving you money from A to B. Their whole business is built on providing those services. Fortunately for us, they do their job really, really well.

Yes. Banks are simply not designed to efficiently move thousands, tens of thousands and even millions of dollars efficiently. You would think so, but because banks have to deal with other banks overseas and they have their old ways of doing things and they simply pass this cost on to you (plus a little extra for shareholders). 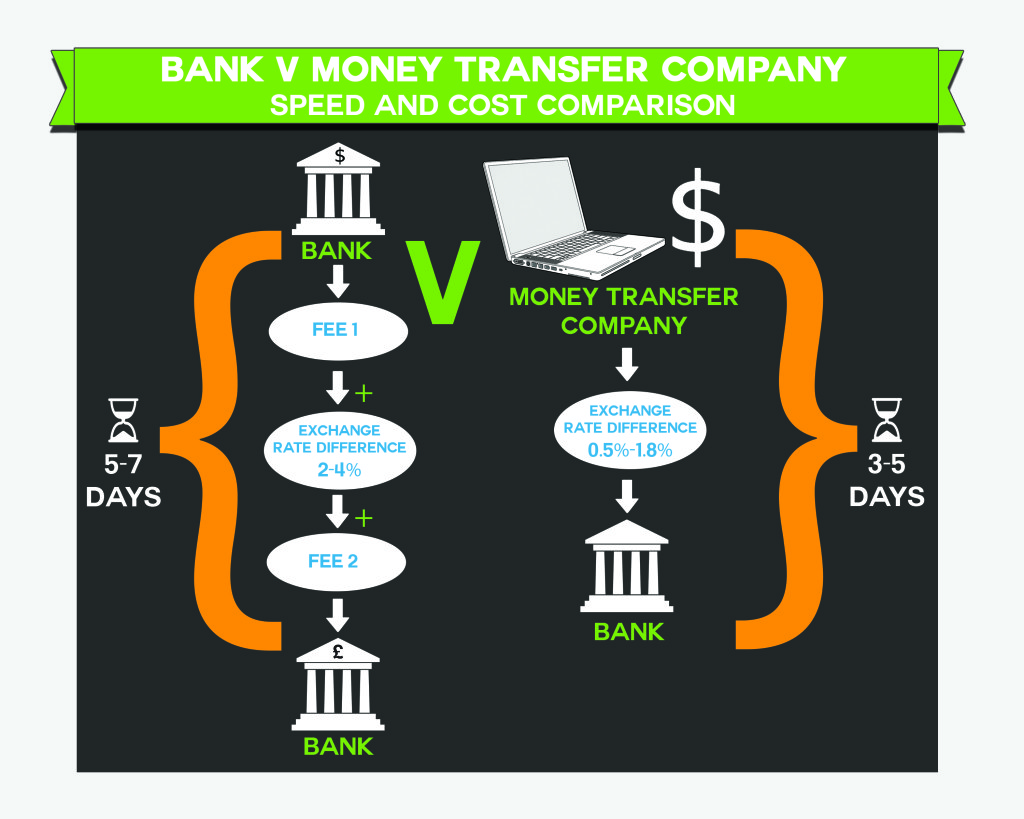 Did you know that the rate offered by a bank is often the same rate offered all day? Very simplistically, they pool your funds with others at the end of the day and then decide how much money needs to go to each country. What this means for you is that you will be offered an exchange rate that is uncompetitive right from the outset to allow to currency movements throughout the day and you will be charged a fee as well. The receiving bank will also likely charge a fee at the other end for their trouble in receiving money.

Speed is also an issue because of all the checks and balances that need occur between two banks in different countries. Basically your funds need to clear a number of different accounts before they make it to the final destination.

By comparison, a dedicated transfer company has local bank accounts at both ends, this enables them to avoid fees of the receiving bank and transact faster too. They also deal with currencies exchange rates in real time which means the risk of currency fluctuations is dramatically minimised. Then they pass most the savings and speed advantages on to you because that is their business model.

Still want to use a bank?

I hope you see we did try hard to save you some money back there. If you can’t be convinced and you still want to know how to use your bank – here you go. We can at least make it as least painless as possible. 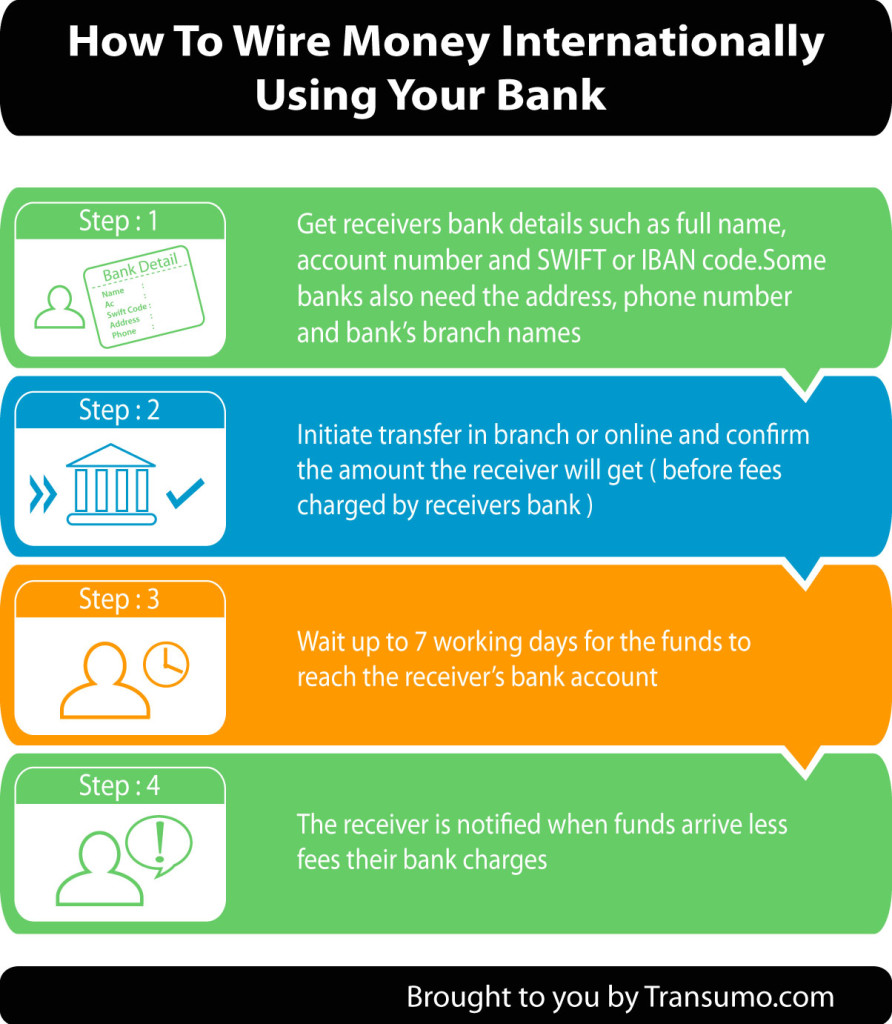 Telegraphic transfers (international) or wire transfers (USA) have been the main way of transferring larger amounts of money overseas to another bank account both individual or business prior to the internet.

In the modern era, SWIFT provides a network that enables financial institutions (e.g. Banks) worldwide to send and receive information about financial transactions in a secure, standardized and reliable environment.

All SWIFT participating banks are assigned a SWIFT or Business Identifier Codes (BICs). Any banking customer can send payments overseas to any other bank account under an assigned specific SWIFT code.

Wire or International Telegraphic Transfer (ITT) is an expensive method of sending funds overseas. Often both the sender and the receiver have to pay bank fees to enjoy this service.

In the United States, major banks charge around US $45 – 50 per outgoing foreign telegraphic transfer.

In Canada, major banks generally charge $15 – $40 CAD. If you are a customer of Tangerine, we also wrote about Tangerine Wire Transfers.

The receiver’s bank fees will depend on the destination country and individual bank. On average receivers pay between $10 – $30 for each incoming telegraphic transfer with some as high as $50.

Apart from being expensive, many people and businesses are unaware of the receiving fees banks charges for incoming transactions.

Besides fees, banks also charge for currency conversion. Most of the time the sender initiates the transfer in their home currency and this is converted to the nominated local currency (e.g. Australian Dollars AUD to British Pounds GBP). The exchange rate difference from the interbank rate for converting your currency can range from 2-4% of the amount transferred. This amounts to an additional $200 – $400 for every $10,000 you are sending.

While banks may be a common option the combination of fees and uncompetitive rates means it is quite expensive and we highly recommend looking into money transfer companies as a better solution.