Even before the internet existed there were companies other then banks who offered customers a fast, reliable and convenient way to send money to others – usually to family back at the home country of origin.

See our page on “What is Remittance?” to understand exactly what remittance is.

Western Union is the most famous for this, but there are many others. Traditionally these services had physical locations at both ends, but the internet has meant that payments at both ends can be made online or in person and some even offer to pick up your cash.

Typically a remittance company charges between 6% and 9%, while a money transfer company charges around 1.5% and even less depending on the amount you send (this includes fees and exchange rates).

However, in recent years competition has increased substantially and companies like WorldRemit (review) are growing like crazy because they are reducing costs of send money to others by using partners in different countries.

This extra cost (apart from WorldRemit) is what you pay for the convenience and if you can do all your business online (you and the recipient have a bank account) a money transfer company is a much cheaper option.

As mentioned, some of these services offer several benefits such as cash pickup or even home delivery which can be a huge benefit to some people.

But not all services deal with cash. Wis for example does not. In our article: Is Wise Safe? we go into detail at the measures services go to help with the safety of their customers.

How to Send Money Overseas using a Remittance Company 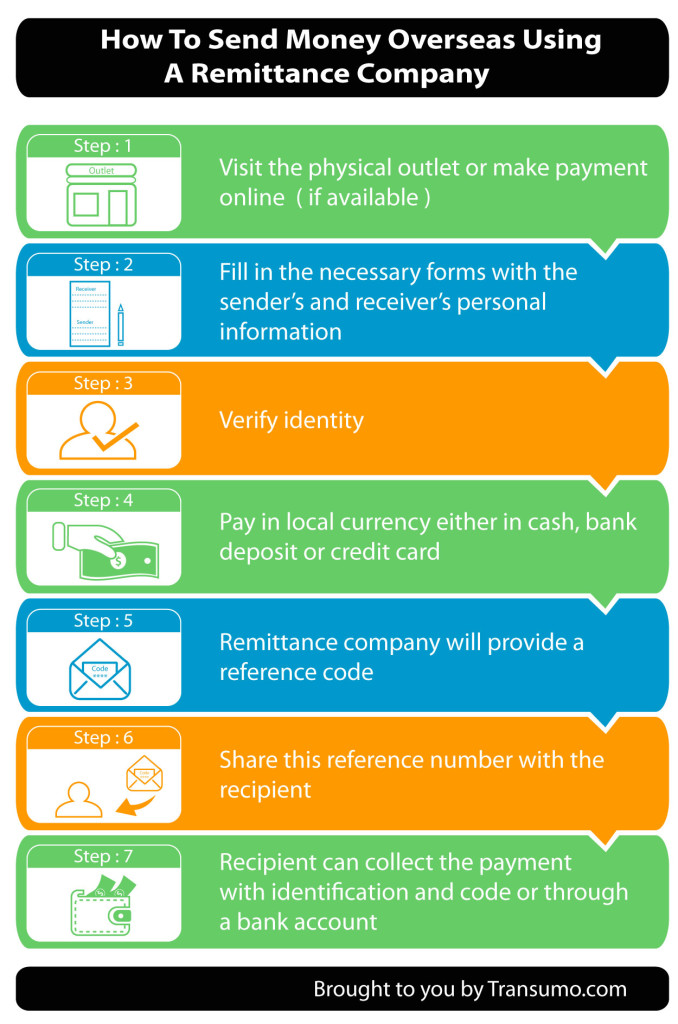 Western Union is not a new company, it started back in 1851, when it offered telegraph service in the United States. However, in recent years, Western Union has emerged as a leading financial services company that includes instant money transfer and physical locations everywhere on almost any country in the world.

Founded in 2001 and purchased by PayPal in 2015, Xoom (review) is a relatively new company that offers international money transfer service from US, Canada, UK and Europe to over 130 countries around the world. Unlike Western Union and MoneyGram, senders cannot go to a physical outlet of Xoom to initiate the international money transfer. Xoom only offers its services through its online portal.

Xoom charges the sender based on the chosen payment option.

Remitly enables immigrants to the developed world who want to send money home through either a fast (express) option or and economy option.

Fees are kept low especially if you consider the convenience, speed and ability for recipient to receive cash.

They are also very flexible when it comes to funding your transfer which can be done though a credit card, debit card, or bank transfer.

We uncovered a lot more in our review of Remitly here.

You might also like Remitly Vs Xoom because Xoom allows you to send money to family members in both developed and developing countries whereas Remitly is limited to just sending money to developed countries.

Formally known as MoneyBookers, Skrill (review) has emerged as a big player in money transfers and is becoming competitive in other areas and even competes with PayPal in most areas.

However Skrill also offers a Prepaid Mastercard to its European customers and even enables you to buy and sell crypto.

Sending money with Skrill can be done in two ways. One option is quite competitive on fees, speed and service. The other option is best avoided.

However, sending large sums can turn out to be expensive due to the percentage based fee structure of these companies.

Anyone who is wanting to send money overseas from bank to bank account we highly recommend looking into money transfer companies as a much cheaper option.