7 Things You Need To Know Before Getting One

In 3 minutes, you are going to find out if the Travelex Card is your best option. 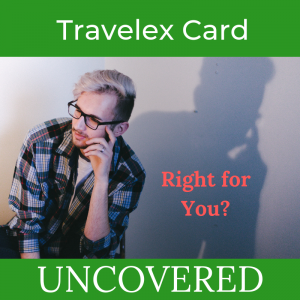 The Travelex card a multi-currency prepaid Mastercard you can top up in your local currency and use around the globe in other currencies and save on expensive ATM fees.

In some situations it may be the best choice, but in others there are likely better options.

1. Is a Travelex Card Right for You?

Compared to using your debit or credit card from home, Travelex card can help you save some money on exchange rates and hold multiple currencies in your account. Also because there are no ATM withdrawal fees, it can be a better option when you’re traveling overseas.

But that does not mean it is right for everyone.

Although not available in the US, the TransferWise Card (review) may be a better option.

Travelex is quite simply not the most competitive card of this kind. While the company was one of the first to offer a travel card – many emerging companies offer a far cheaper service, and some even let you hold many more currencies.

Travelex may be right for you if:

Here is a video that shows the positives of the card. Read on to get the full picture.

2. How Does the Travelex Card Work (or Not)

Travelex is a prepaid card issued by Mastercard. You can top it up via bank transfer from your bank account (using the 16 digits on your card as payment reference), or from the Travelex app. The latter is the fastest method, and you can use either your debit or credit card to add funds to your Travelex Card.

It is possible to add funds either in your local currency or top up in foreign currency directly.

You can then use your card to withdraw cash from ATMs worldwide or make payments in any location that accepts Mastercard.

Because Travelex is a prepaid card, it also has some limits. To begin with, you can only spend funds that have already been added. This could be a positive thing if you want to keep your spending under control, but it’s not possible to arrange overdrafts.

As is the case with some prepaid cards in general, some vendors may also refuse to accept your card; for instance, it is unlikely to be able to use it for hiring a car or to make online bookings at some tourist facilities.

The main difference between Travelex and a bank debit card is the possibility to hold multiple currencies on the same card. While some banks offer multicurrency accounts, their debit cards are issued in local currency only.

Founded in the pre-internet era, Travelex has over 1,000 stores and ATMs in 26 countries. If you have any issues with your card, you can ask for support in any of these locations.

Alternatively, you can benefit from online and in-app support.

4. How to Get a Travelex Card

Unless there is a Travelex store near you, the easiest way to get a Travelex card is by ordering it online. The card is usually delivered in the next business day, although delivery times could vary from country to country.

You can also order the card online and opt for store collection. In this case, you will usually be able to collect the card after 14 days.

You will have to activate your Travelex Card upon arrival. It is possible to activate it from your desktop or mobile app, or by calling the Card Services.

Travelex is currently present in 26 countries including the UK, USA, Canada, Australia, New Zealand, some countries in the EU, as well as countries in Asia, Middle East, and South America.

The Travelex Card may hold more or fewer currencies depending on the country where you order it. For instance, it holds 10 currencies in the UK and Australia, but US customers can only hold six.

Travelex Card is one of the most expensive prepaid foreign currency cards despite its free ATM withdrawals.

Here are the fees and limits you can expect.

In the video above, this traveller suggests the solution is cash, but the problems with this is that you still get charged a conversion fee by you bank which is potentially even less competitive. The solution is a multicurrency card that offers a good exchange rate of which there are many in recent years, such as TransferWise, WeSwap, and Revolut.

Travelex Card could be a great financial product, but many of its competitors offer better deals and more advantageous currency exchange rates which is where the majority for fees often get charged.

Currently, the card is popular mainly in the USA, due to a lack of solid competition in this country.

However, it will likely lose clients as soon as other similar services start to expand their business.

Is Travelex Card worth it? If you live in the US and need a card for traveling, Travelex is undoubtedly a great alternative to a traditional bank debit card. Consumers in the UK, Oceania, and the EU surely have better options to choose from.

Can You Do Better? – Fees, Services and What Works Best N26 is an app based bank that covers Europe, UK (announced leaving 11 Feb) and the US. It is currently a leader and for very good reason but there are some tremendous alternatives. In the next few minutes we will blow the lid on…

WorldRemit is a great way to send more money home if you are serious about reducing fees. In this review, we’ll show you when WorldRemit works well and also some other options which may work well. In the next 5 minutes, you’ll learn whether WorldRemit is right for you. (I’ll also show you how you…

6 Things You Need To Know Before you Sign Up Are you ready to bring your banking into the modern day and stop giving money to the big banks? Monzo might be the answer, through its awesome app – or not… In a few minutes you will know if Monzo is right for you. And…

7 Must Knows – Before Banking with Bunq In a just a few minutes you’ll get to know whether Bunq is the right card and app for your needs. This is not just another “Bunq is awesome” type review. I am going to show you where Bunq works and where it does not. Uncovered! 🙂 As…

An international money transfer service is a great way to reduce the fees banks charge. In this review, we’ll uncover what makes TorFX (potentially) great based on your needs. TorFX say, “Excellent Exchange Rates”. But here’s the deal: A money transfer company needs to do far more than have low costs to move your money. Yes,…

Opening a business in Hong Kong, Singapore, or the British Virgin Islands (BVI) comes with a lot of flexibility and benefits – but what about managing the money you make? Holding a multi-currency account or sending foreign currencies via high street banks can be complicated and expensive – defeating the purpose. Statrys solves these issues…